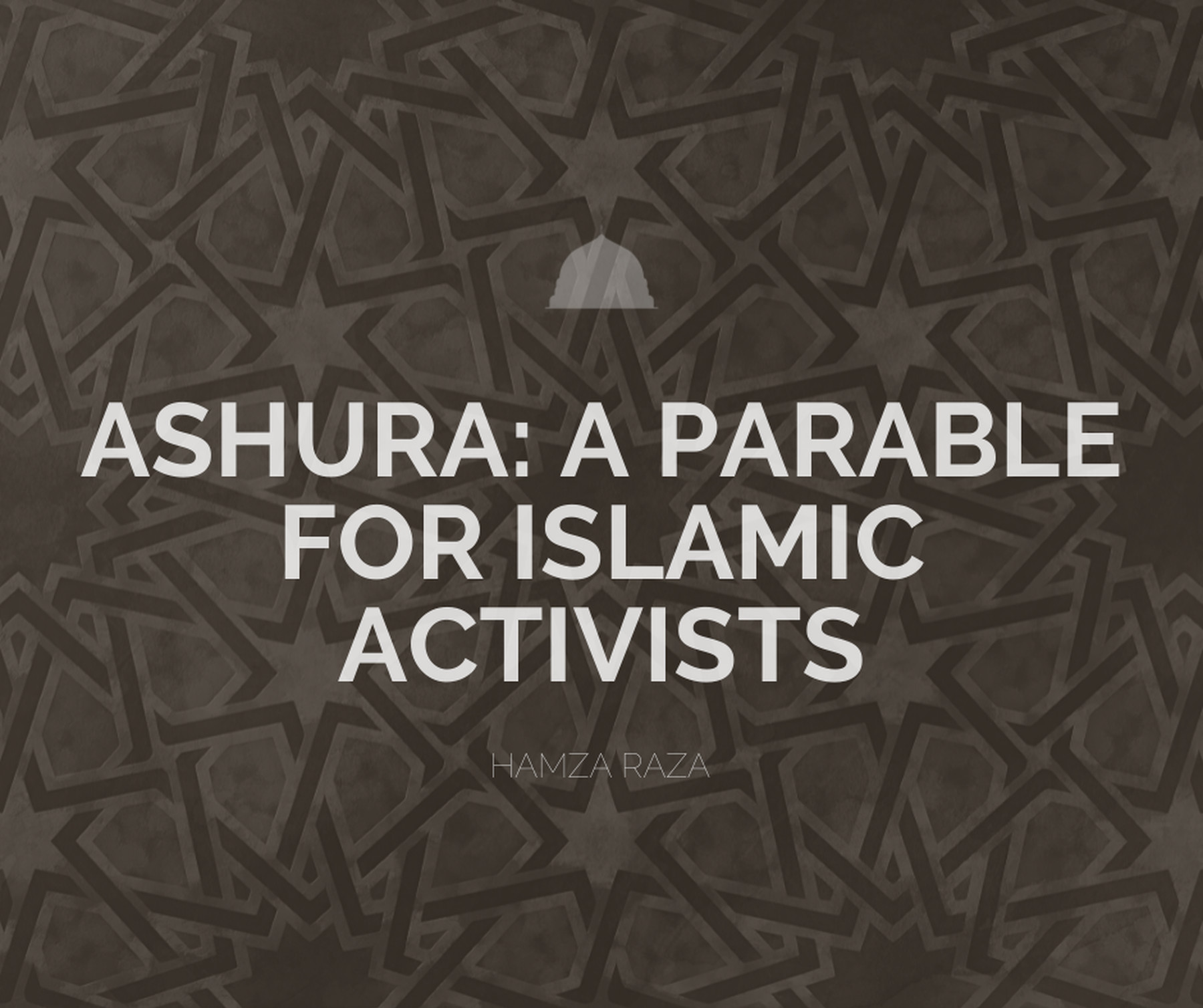 Ashura, which falls on the tenth of Muharram, is the date of two important events in Islamic history: the freeing of the Bani Israel from the oppression of the Pharaoh, and the martyrdom of Imam Hussain (may Allah be pleased with him), the grandson of the Prophet Muhammad ﷺ. Both of these stories give Muslims lessons in how to fight oppression, while simultaneously basing our activism against oppression on an Islamic epistemic.

The Story of Moses

The first of these events is that of Moses (peace be upon him) and the Children of Israel being freed from the oppression of Pharaoh. Moses is a Prophet who is mentioned more times than anyone else in the Qur'an, a total of 136 times. In reflecting upon the story of Moses, it is crucial to understand the story as one of resistance to an oppressor.

Pharaoh was a man who held the Children of Israel captive as a slave population. He killed every male child for a whole year in the year that the Prophet Moses was born. He was an arrogant tryant who oppressed people.

One of Allah's first commandments to Prophet Moses was “Go to Pharaoh, for he has transgressed” (Qur'an 79:17) In multiple other places, Pharoah is also described as one of the Dhalimeen, one of the oppressors. The word dhulm in Arabic means oppression. Linguistically, it literally means to take something outside of where it belongs.

The intrinsic idea behind this is one of God-given rights. This is also found in verse 70 of Surah Isra where Allah says “Surely, we have honored the children of Adam.” Every single human being on Earth is granted certain rights by God. These are intrinsic rights that stem from our humanness. No person, government, or anyone else has the right to take these rights away.

When God is freeing Moses’ people from Egypt and granting them these unalienable, God-given rights, he tells Moses to put his staff down before the Red Sea is split. It was God who splits the sea, not the staff of Moses. But an important lesson from this story is that we have to work for our liberation. Even if we think what we do is small and not effective, we should take every single action that we can, even if it is something as small as putting a staff down.

Malcolm X once said that his people were not going to “keep our eyes fixed on the pie in the sky.”1 He was someone who was going to do everything that he could to help the oppressed in this country and around the world. It is critical that we follow in this legacy of working to ease the suffering of those around us.

The Prophet Muhammad ﷺ said that “The most beloved acts to Allah are those that are small and consistent.” So Allah (subhanahu wa ta'ala) does not ask us to take down structural racism all at once. But if we could take even an hour or two out of our time every month to help the community however we can, that too is an act that is beloved to Allah.

The Story of Karbala

Another important parable of resisting oppression that occurred on the 10th of Muharram that of Imam Husayn’s voyage to Kufa. It is very important to understand that the significance of this event is not limited to any specific sect or Islamic group. Rather it is an important event for all Muslims to ponder upon and take lessons from.

Imam Husayn was the grandson of the Prophet Muhammad ﷺ, and the son of Ali ibn abi Talib and Fatima bint Muhammad (may Allah be pleased with them). In his era, there was an oppressive ruler named Yazid who was known for being an abusive drunkard, skipping prayers, and generally being of a very low moral character. Beyond these moral flaws, he was also someone who used to persecute dissidents.

Imam Husayn decided to go to from Madina to Kufa, in present-day Iraq, to protest the oppression of this ruler in an act of nonviolent civil disobedience. He and a group of about 100 people embarked on this journey and were confronted by Yazid’s army on the way there in the town of Karbala. At Karbala, Yazid’s army surrounded Imam Husayn and his people to the point that they were deprived of food and water. As they were dying of thirst, Yazid’s army then completed massacred Imam Husayn’s people, including Imam Husayn's six month old son.

Another important lesson lies in the “The Hero of Karbala”, Zaiinab bint Ali, the granddaughter of the Prophet Muhammad ﷺ and daughter of Ali (may Allah be pleased with him). It was she who courageously spoke up against Yazid’s court and exposed his war crimes in front of everyone.

The lesson in this story lies in the importance of fighting oppression. The great Islamic intellectual, Ali Shariati said that “Every place is Karbala and everyday is Ashura.” Shariati continues on to say “Those who died committed a Hussayni act. Those who remain must perform a Zainabi act. Otherwise, they are Yazids.”

What this means is that it is critical to understand the deep importance in Islam for fighting oppression. We must recognize the message of Imam Husayn, and fight oppressors everyday and every place. Whether that be the victims of police brutality and systemic racism in our country or victims of militarism abroad, it is critical that we stand up for the oppressed every day in every part of the world.

There are numerous Karbalas going on all around us today. When we see Trump’s family separations that are leaving children orphaned, that is a Karbala. In our country, a Black person is killed every 28 hours, and 33% of Black men will go to prison at some point in their lifetime.2 This too is a Karbala. Mass incarceration is not just an American problem. It is a global problem. 40% of Palestinian men also face prison time at some point in their lifetime.3 We must engage in a Hussayni act by co-resisting with the oppressed, while also engaging in a Zainabi act by serving to amplify their voices.

In the summer of 2014, right before my freshman year of college, I remember how Israel bombed the Gaza Strip, killing 2000 Palestinians, including 500 children. Human Rights Watch, Amnesty International, the United Nations, and a plethora of other human rights organizations condemned the Israeli bombing as a crime against humanity. Still despite this, 435 members of Congress and 100 Senators—535 American elected officials—lacked the moral courage to condemn this act of oppression.

Beyond that, the President of the United States at this time, one who had the middle name of Hussein, refused to follow in the legacy of Imam Husayn and instead stood in solidarity with the Yazid of our time as they murdered innocent children.

It is critical that we follow in Imam Husayn’s legacy of nonviolent civil disobedience and help those who are suffering in whatever way we can. One of the most important ways we can stand with Palestinians for example, is through the BDS movement, a movement of boycott, divestment and sanctions, by not investing in companies and products that are complicit in their oppression.

The Importance of Purification

Beyond just resisting oppression, it is important that we understand another important aspect of this legacy. Allah (subhanahu wa ta'ala) says in verse 11 of Surah Ar-Ra'd that “Allah does not change the condition of a people until they first change what is in themselves.”

So as we engage in this Islamic legacy of fighting oppression, we also work to purify ourselves. Audre Lorde, a great Black American thinker and civil rights activist, stated that as we fight oppression, we must also constantly confront the oppressor that exists within all of us.

Martin Luther King Jr, in his “Letter From a Birmingham Jail” says that the first path in the journey of attaining freedom is “self-purification.” Because if we are oppressed and not purified, then we become oppressors ourselves. History can attest to many examples of this.

One of the most profound Islamic critiques of Communism is that it is not guided by a moral and spiritual ethic. History has shown Communism to fail time and time again. After the oppressive Capitalists are overthrown, the Communist party comes into power, and acts no differently. They are just as oppressive and exploitative as the people that they replaced.

For Muslims resisting oppression, it is crucial that we understand that the biggest oppressor is not an external force. Rather the oppressor lies within us. This is the reason that true activism cannot be achieved without also striving not to be oppressors in ourselves.

Activism Based on an Islamic Epistemic

In the past few years, we have seen the rise of many Muslim activists in the United States. In this regard, it is important to differentiate between Muslim activists and Islamic activists. Muslim activists are just activists who happen to be Muslim. They may have outward displays of religiosity. But ultimately, being Muslim is an identity to them.

Conversely, Islamic activists are those who see Islam as the impetus for their activism. They see their activism as an extension of their Islam. Such a label is much more meaningful as it presents an activism that is based on a change beyond that of just the material, finite nature of this world. Rather it is something that seeks to benefit us eternally in the next life.

Many in the community have spoken about the rift between Muslim activists and Islamic scholars. The underlying issue behind this fissure is one of epistemology. Epistemology is a big fancy word that just refers to how do we know what we know. How do we determine what is good and bad? In an Islamic epistemic, good is defined by what God says is good, while bad is what God says is bad.

It is critical that we as Muslims understand that our activism is based on a different epistemic than that of other ideologies. It does not mean that Islam and such ideologies are diametrically opposed. But rather, we should view any ideology, particularly those of leftism, feminism, or liberalism, through an Islamic lens. Through that, we may take from those ideologies that which intersects with Islam, and apply an Islamic critique to other aspects that contradict such a legacy.

Ultimately, basing activism on an Islamic epistemic begins with reflecting upon stories such as that of Moses peace be upon him) and Imam Husayn (may Allah be pleased with him). Through understanding the importance of justice and resisting oppression within our tradition, we can be better in fighting oppression while also doing so in a way that brings us closer to God.

Hamzah Raza is currently a graduate student in theological studies at the Harvard Divinity School. He completed his Bachelors in Religious Studies at Vanderbilt University.

To truly address racism, there is a need to reinject an Islamic perspective into our discourse that racism is firstly rooted in worst spiritual disease of the heart.