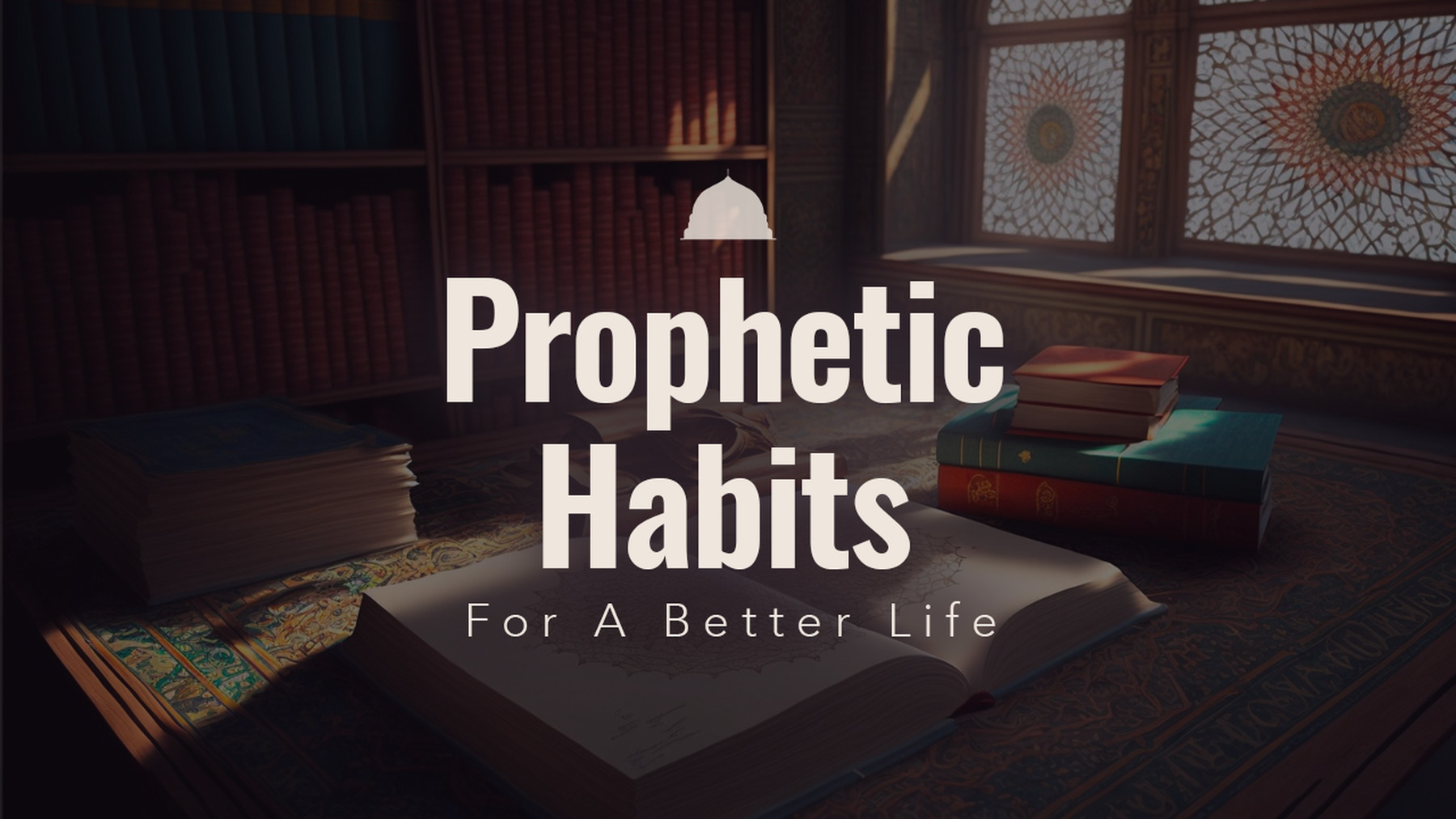 Open YouTube, and their algorithms will greet you with the latest life coach explaining how to hack your body to live life to the fullest while at the same time igniting all sorts of dopamine responses.

From life coaches Tony Robbins and Lisa Romano to health instructors like Derek (More Plates More Dates), everyone has tips on getting the best out of our biological machinery. Morning ice plunges, intense breathing exercises, and surefire investment strategies make up the latest concoction for a more “fulfilling” life.

But what about our spiritual machinery? Are you a body or do you have a body? Surely neglecting what truly makes us human will lead to excess and harm.

Luckily, Allah sent us the perfect model in our Messenger Muhammad ﷺ, whose daily life was filled with unparalleled wisdom and spiritual guidance, bringing harmony to our entire sense of being. Let us revive one Prophetic ﷺ tradition which will transform our lives.

The companion Abdullah ibn Umar said that one day he was with the Messenger ﷺ "And a man from among the Ansar came to him and greeted the Prophet (ﷺ) and asked: 'O Messenger of Allah, which of the believers is the best?' He said: 'He who has the best manners among them.' He said: 'Which of them is wisest?' He said: 'The one who remembers death the most and is best in preparing for it. Those are the wisest.'"

The Messenger of Allah ﷺ would remember and remind others of death when he succinctly stated, "Be consistent in remembering the destroyer of pleasures - death."

Yet remembering death does not come naturally to many of us. We are intrinsically programmed to avoid pondering over our mortality. Whether it's an evolutionary quirk or a spiritual malaise, we remain willfully obtuse to the reality of our graves. To make matters worse, we are inundated by multinational corporations spending billions to convince us they have all the solutions for our inescapable demise: "Men in their 50s, want to feel young again? We have hormone replacement for you. Women, skin starting to wrinkle? We have all sorts of peptides for that!" Our notion of aging gracefully into death is being replaced with false promises of fountains of youth.

Some may think that living with a focus on death will incapacitate us, leading to inaction and apathy. “The last thing we, as individual Muslims and as a collective Ummah, need is any hindrance to innovation; concentrating on death will lead to that.” Let’s measure that up against the life of our Messenger Muhammad ﷺ and how the remembrance of death affected his drive. Did it prevent him from raising a family, leading a state, or being a military commander? The Prophetic advice of engaging with our impermanence instead of evading it freed him ﷺ from the motivations grounded purely on our physical existence. His inspiration for engaging in all his various activities was the eventual return to Allah. He ﷺ was motivated by the day when we all will stand before our Creator and be questioned if we dutifully discharge our responsibilities. And so remembrance of death, realized within the proper frame of spirit and mind, will empower us to action.

There are many ways that our spiritual ancestors would constructively incorporate the remembrance of death into their routine. Imam Jazuli went so far as to inscribe the word ‘Death’ on the walls of his room. Contrary to modern thought that would diagnose such a seemingly macabre act as a personality disorder, this empowered him to focus his efforts on his akhirah, and he authored one of the most-read books on Earth, the Dalail al Khayrat. His prioritizing death as a central theme in life propelled him into action. The recurring thought of being buried six feet under didn’t paralyze him. Instead, it gave him a sense of urgency, encouraging him to serve Allah in the most beautiful ways.

If we aren't prepared to go to Imam Jazuli's extent of remembering death, there are other methods we can employ. I highly recommend reading Imam Ghazali’s famous chapter, “The Remembrance of Death and the Afterlife,” from his magnum opus, Ihya Ulumu-Din. Imam Ghazali reinforces the importance of the Prophetic habit of remembering death and the many benefits it produces in our lives.

Self-talk also greatly helps. Speaking to our self daily, reminding the self that we will return to Allah and all of our pursuits will be for naught if they weren’t for Allah and His Messengerﷺ can be very transformative. Shaykh Muhyiddin Ibn Arabi used to write immensely beneficial letters to his self, imagining that his nafs was removed from his body and entering into a debate with it as to why it needed to make all of its pursuit for the Afterlife. The great became greats through such intimate self-awareness.

Applying the advice of the Messenger Muhammad ﷺ of remembering death puts us on a path of self-reflection and transformation. Once we start to embrace death, we indeed start to live.