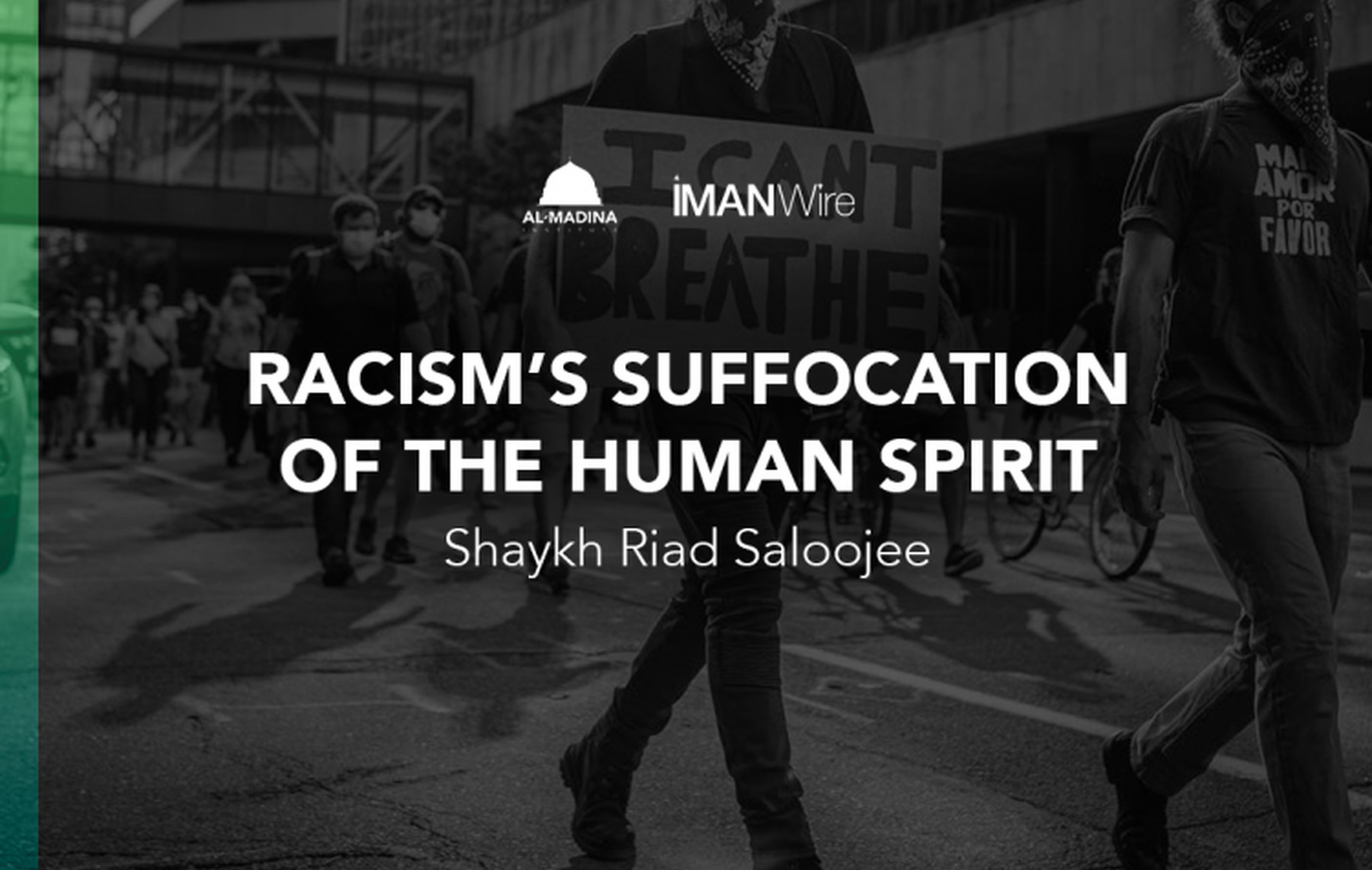 If the chronic killing of Black Americans does not suffocate me, my relationship with the Divine is deeply deficient.

As a Muslim, let me listen to the message of George Floyd’s last words with the ears of my heart: I cannot breathe spiritually if any vestiges of racism remain in my words, deeds, conduct, will, emotions or thoughts.

Can a Muslim who truly seeks the Divine accept even a modicum of racism? No. It is a religious obligation – in legal terms, a farḍ ‘ain – for a Muslim to be anti-racist. Every single Muslim has a religious duty to purify his or her heart, mind and conduct from any trace of racism.

Is it a grave responsibility to ensure that my words, deeds, will, emotions and thoughts are not soiled with the stain of racism? Yes. It is. And this reality is definitively clear in Islam’s texts. The Qur’an emphasizes it powerfully, repeatedly, in the story of our genesis. The story of the creation, folly, fall and salvation of humanity is interstitched with the story of Shayṭān’s, or Satan’s, racist arrogance.

Shayṭān, whose name many scholars affirm means to be distant, becomes Shayṭān through his refusal to obey the Divine command to bow down to our Master Ādam (upon him be peace).

Shayṭān rationalizes his rejection of the Divine command with a false analogy. “I am better than him,” he says, “You created me from fire and You created him from clay.” Shayṭān is veiled from both his own and Adam’s spiritual reality. He sees form, but not spirit; he sees body, but not soul. Enslaved to his materialistic myopia, Shayṭān becomes history’s first racist.

And Shayṭān is no ordinary soul. He roamed in the assemblies of the angels. He falls from grace despite his tremendous spiritual knowledge and distinction. And here is his great tragedy. Once of the spiritually elect, he becomes spurned; once spiritually blessed, he becomes accursed.

His racism is a manifestation, a symptom, of an inner disease that he carried within. That ailment is kibr. The Messenger (peace and blessings be upon him) defined kibr as “looking down on others and rejecting the truth.” Kibr is untranslatable as a single English word. The closest approximations would be arrogant conceit, arrogant vanity, arrogant disdain and arrogant egotism.

A speck of racism, and thus a speck of kibr, in the heart – not even in words, deeds or conduct – disqualifies one from immediate entry into eternal happiness. How grave is that?

The Messenger (peace and blessings be upon him) stated that the one with a seed’s-worth of kibr in his or her heart will not enter Paradise. A speck of racism, and thus a speck of kibr, in the heart – not even in words, deeds or conduct – disqualifies one from immediate entry into eternal happiness. How grave is that?

And if a speck of kibr has this effect, it must contain an unspeakable potential for evil. In the Sharī‘ah, the categorization of a sin as minor or major is due to the harm it produces to the individual and collective good. Kibr is not a minor sin. It is an enormity. And not only that: It is of the gravest enormities.

This is crystal clear in the story of Shayṭān’s genesis. The arc of his evil spawned by his kibr is numbing: delusion, self-aggrandizement, arrogance, lack of gratitude, obstinacy, spite, malice, violent envy, rage, cold-heartedness, treachery, lies, duplicity, conspiracy, and vulgarity.

And all this from Shayṭān’s kibr when there was only one human pair, and before they were all commanded to leave the Kingdom of Heaven and descend to earth. With the multiplication of our Master Ādam’s (upon him be peace) progeny, and human diversity, the evil arc of pride expressed through the histories of racism only gets more savage and more horrific.

Because racism is kibr projected into social reality, its harms invariably violate the rights of God’s creation. And transgressions against the creation – in legal terms, ḥuqūq al-‘ibād – are not forgiven by the Divine unless certain conditions are met. My racism in word, deed or conduct to others enslaves me to them. My bondage is only broken with legal redress and restitution, or their forgiveness.

How is this? Is associating partners with God, or shirk, not “looking down” upon the Divine and rejecting His Truth and His truths?

Shirk is Shayṭān’s manifesto. He wants humans to associate partners with the Divine (shirk) either explicitly (shirk al-akbar) or by showing ingratitude to God (shirk al-asghar), of which sins are the most dire consequence. Indeed, the entire spectrum of diseases of the heart could be seen as expressions of this kibr – or shirk, at different levels – against the Divine.

Even as you read this, Shaytan’s kibr charts his own destiny. What prevents him from repenting and relenting except his kibr? He knows better than you and me: His cure and felicity lie in purifying his nafs from the evil of kibr.

And so, too, I must acknowledge that to rid myself of racism, I need to rid myself of kibr. I must uproot the seeds of kibr from my deeds, words and conduct, which are the result of my will, emotions and thoughts. Kibr is forbidden, ḥarām, to harbour inwardly or express outwardly.

And, yes, without doubt, parallel legal, political, economic, social and educational activism is an essential and necessary communal obligation, a farḍ kifāyah, while holding true to Islam’s ethical and legal constants, and realizing always the higher objectives of the law (al-maqāṣid).

But it begins with me. I must never lose sight of the fact that civic social reality is constituted by every citizen’s deeds, words and conduct stemming from their will, emotions and thoughts. Islam, Īmān and Iḥsān. Law, belief and spiritual excellence. Body, mind and soul. Inner and outer. The personal is the political.

The Epidemic of Fear and the Antidote of Hope

Individually, the consequence of our fears is a more fragile mind and spiritual state, wrecked with the havoc of worries on the next paycheck, the next trip to the grocery store, and the next step to resolve this global crisis.