Abdullah Zühdi Efendi and the Mosque of the Prophet

Abdullah Zühdi Efendi is best known for his outstanding architectural calligraphy pieces which adorn the Mosque of the Prophet in Medina. The restoration work of the Mosque of the Prophet lasted three years and entailed the expansion of the mosque area, additional columns and the courtyard. Abdullah Zühdi Efendi was charged with the calligraphy inscriptions which cover the entire qibla wall, the top portions of five doors, and the mihrab. According to some sources, in terms of quantity, his work remains the largest example of calligraphy in celi sülüs1 style produced to this day by an Ottoman calligrapher.2 His calligraphy continues to be a source of beauty and inspiration and can be considered one of the master works of Ottoman calligraphy.

The reproduction of a masterwork, taklid versus copy

In order to understand the reasons for which calligraphers may reproduce a piece written by another master, we must first briefly introduce the way calligraphy is taught and learned.

The first years of calligraphy training (the length of which can greatly vary depending on the ability of each student), are spent copying the model lessons produced by the teacher and, later on, old masterworks by different calligraphers.3 Once the student has absorbed all the aesthetic canons — rules of proportions, harmony, principles of sentence building, stylistic differences and so on — he or she may start creating new compositions. Like any traditional art form, the learning process is characterized by the fact that it never ends. Even after receiving the ijaza (diploma), calligraphers will always retain the relationship with their master and continue to receive feedback and corrections for their work, as well as refer to old masterworks for guidance.

While every calligrapher strives to adhere strictly to the classical canons, they will gradually develop a certain “style” (şive), voluntary or not, which will distinguish their works from other calligraphers’.4 It is in this context that the reproduction of a masterwork, a taklid yazı, is seen as a valuable exercise. In the words of Uğur Derman, a taklid does not mean a mere “copy” (which could be easily misconstrued as a “fake”). A taklid is a valuable exercise in which the calligrapher tries to recreate, as accurately as possible, the şive of another master.5 In doing so he or she must try to obliterate his or her own stylistic preferences and give way to the essence of the original piece. For this reason, many great master calligraphers engaged in this practice, often documenting their reproductions and the name of the original author in their signature. It is an hommage of sorts, done in the hope of partaking from the knowledge, blessings and skill of the original masters.

The reproduction of the piece by Abdullah Zühdi Efendi

I embarked on the reproduction of this piece after having worked on the same Qur’anic verse (33:56) some months earlier. I had come up with an oval composition and, as is normally the case with calligraphy, I wasn’t entirely satisfied with my version. I had subsequently seen other versions by other calligraphers and enjoyed seeing how they solved certain transitions or came up with an entirely new composition. However, when I saw the piece of Abdullah Zühdi Efendi all my questions were answered. It was a courageous composition combining several horizontal keşides (elongations) on the lower right side of the piece; a master composition that combined strength, skill, rhythm and dynamism. Needless to say such combinations had not even crossed my mind nor my sketchbook.

It had been quite some time, years in fact, since I had done a taklid yazı. Given my admiration for Abdullah Zühdi Efendi and this piece, needless to say I undertook the task with enthusiasm.

Like other architectural pieces, the original piece by Abdullah Zühdi Efendi was executed following the traditional techniques of the time. Calligraphers first wrote the verses on paper and created a detailed template (kalip). Once the outlines of every letter and vowel sign were pricked with a needle, the template was placed over the final surface and pounced with ash to transfer the original contours. The stone was then carved by craftsmen, and it was finally painted and gilded.

I followed a similar method in order to recreate the piece as a zerendud calligraphy panel. A zerendud calligraphy panel is a piece of calligraphy which is painted with crushed gold leaf and has a mat finish (as opposed to the application of gold leaf directly onto the surface). Similar to the process followed for the architectural pieces, the piece is first written with ink on paper, and then the template is pricked with a needle and transferred onto the final surface. The final letters are painted rather than written.

I first wrote this piece in ink, looking very carefully at the photographs and images of the original piece. It was the first time I analysed in detail the style of Abdullah Zühdi. His style is very elegant and even though the quality of the photographs I had was not very detailed, I tried to stay as close as possible to the model. In a sense I felt like I was having a “conversation” with Zühdi Efendi, noticing certain particularities, admiring certain choices of composition, trying to balance the space between the alifs in the same way he did, struggling with the alignment of the horizontal keşides.

As is common practice for most pieces in celi sülüs I put it aside for a few days, worked on other things and came back to it. Once the template was ready, I transferred the calligraphy onto the handmade murakka and proceeded to outline the letters in gold with a thin brush. The letters were then filled with various layers of gold until the desired consistency was reached. A final phase ensued of detailed and painstaking re-contouring, sharpening and correcting. This was followed by a light burnish being careful to maintain the mat quality of the piece.

I left the signature until the very end. Abdullah Zühdi had not signed this piece so I had to decide where to place the long formula “copied by …”. I finally decided to place it on the left side, near the end, and divided it into two parts, so the name of Abdullah Zühdi Efendi would stand on its own. I purposefully wrote it very small, not wanting to alter the overall balance of the composition excessively.

In all honesty, looking at the final result I have to say it is a combination of my own letters and the composition of Abdullah Zühdi, so in a sense the “conversation” continues. Apart from all my own shortcomings it was a humbling and enlightening process for which I am grateful — grateful for those fleeting moments where time and space blurred and I had a glimpse of the great master Abdullah Zühdi Efendi through his calligraphic creation. 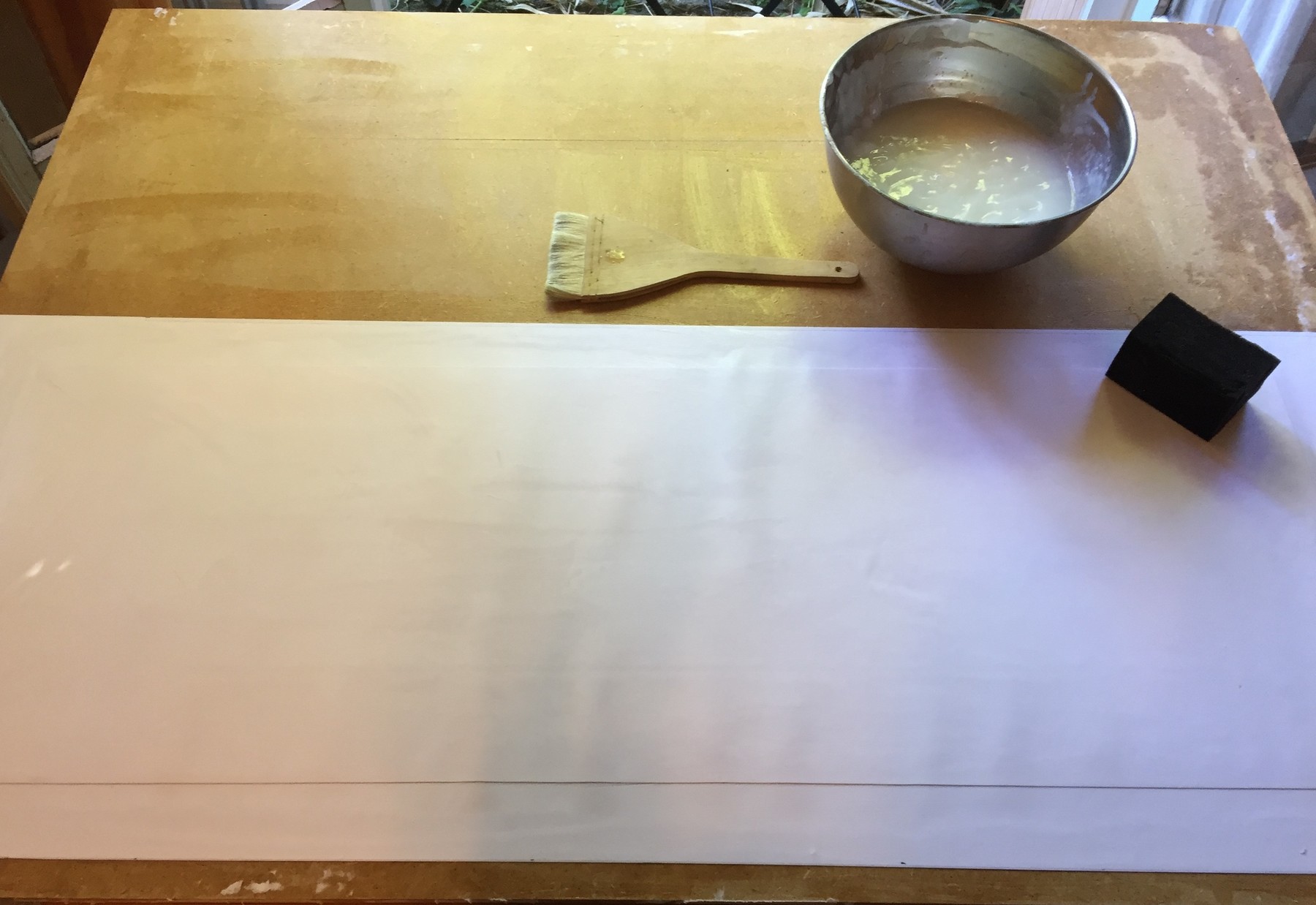 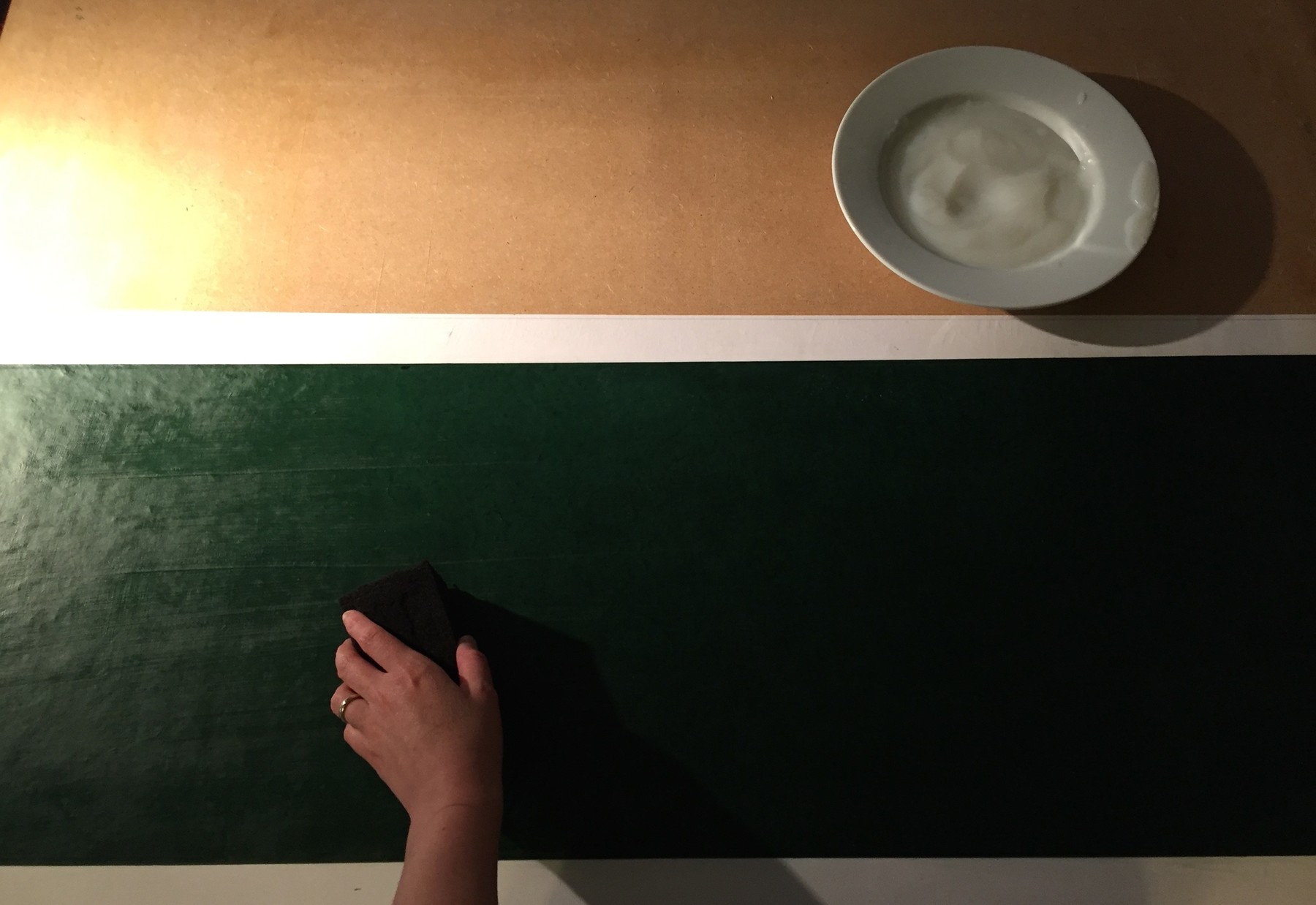 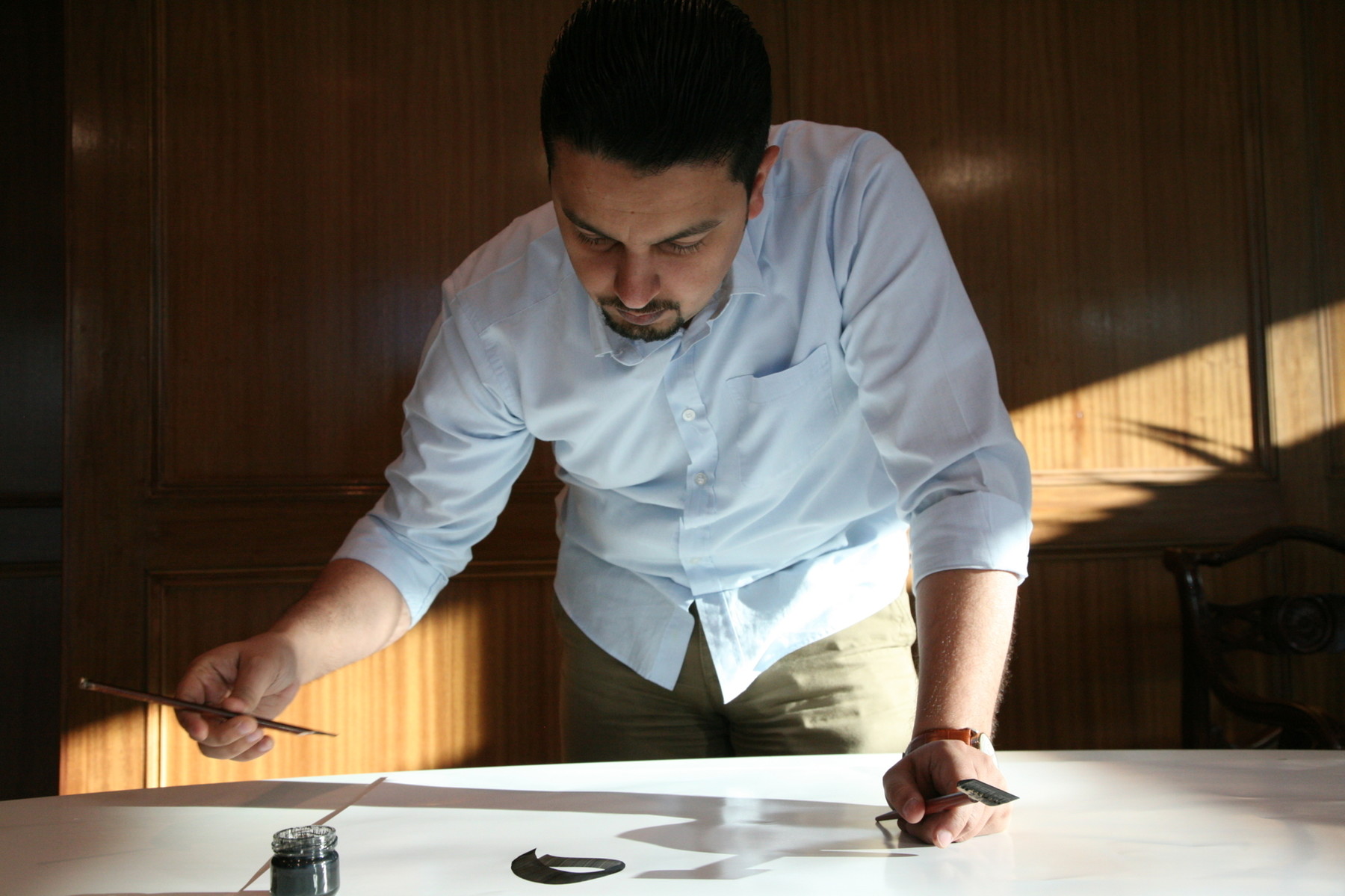 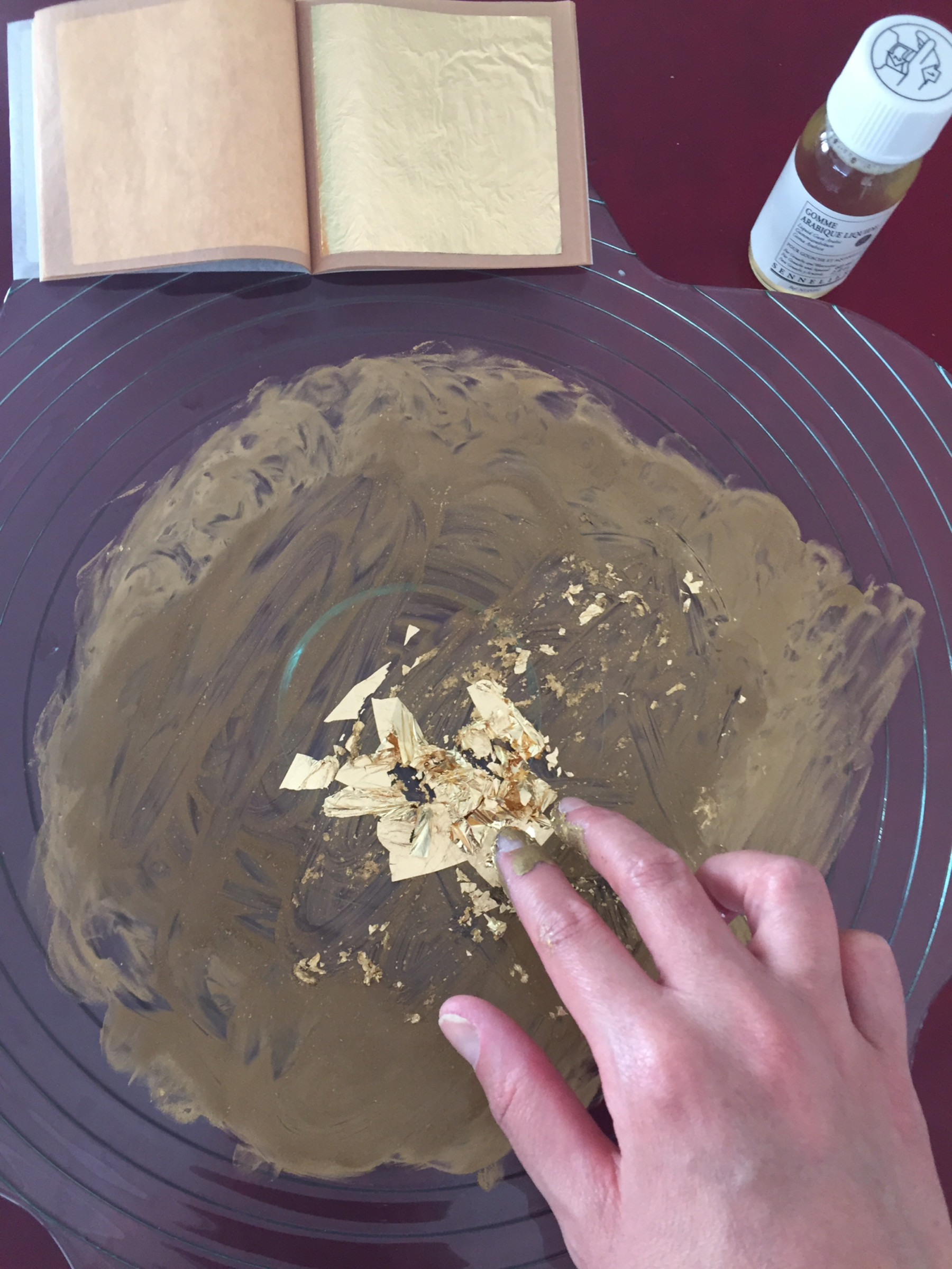 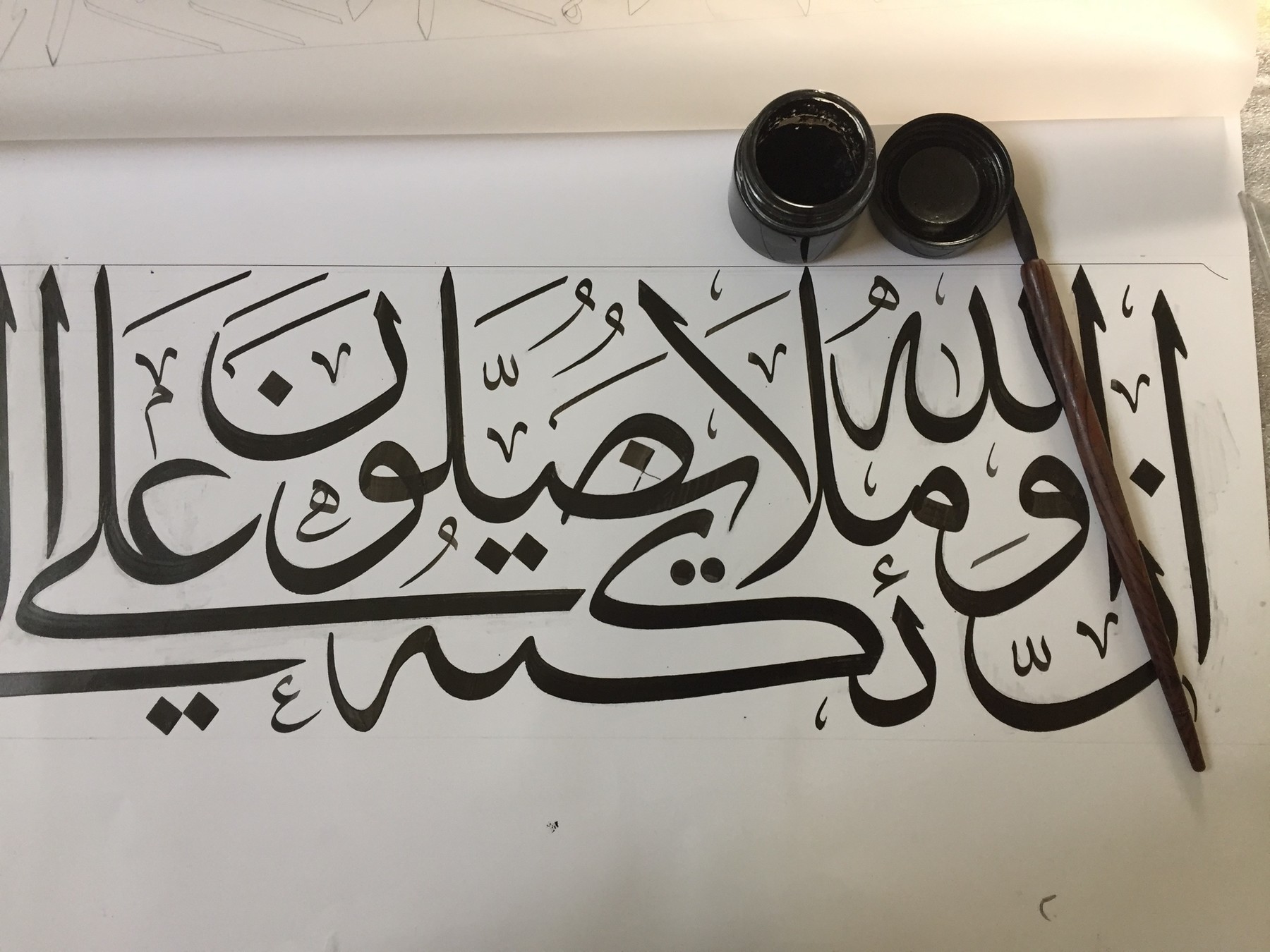 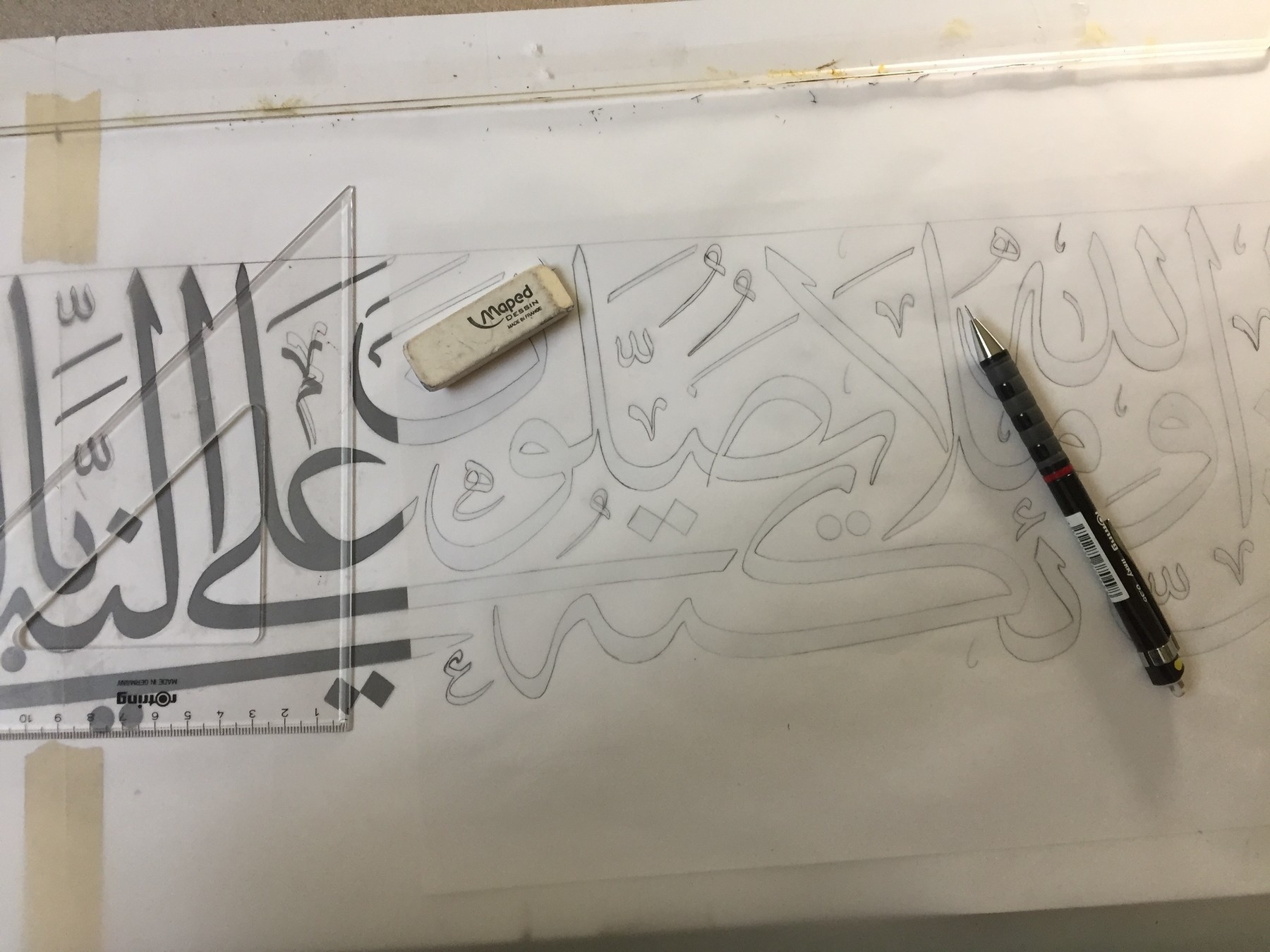 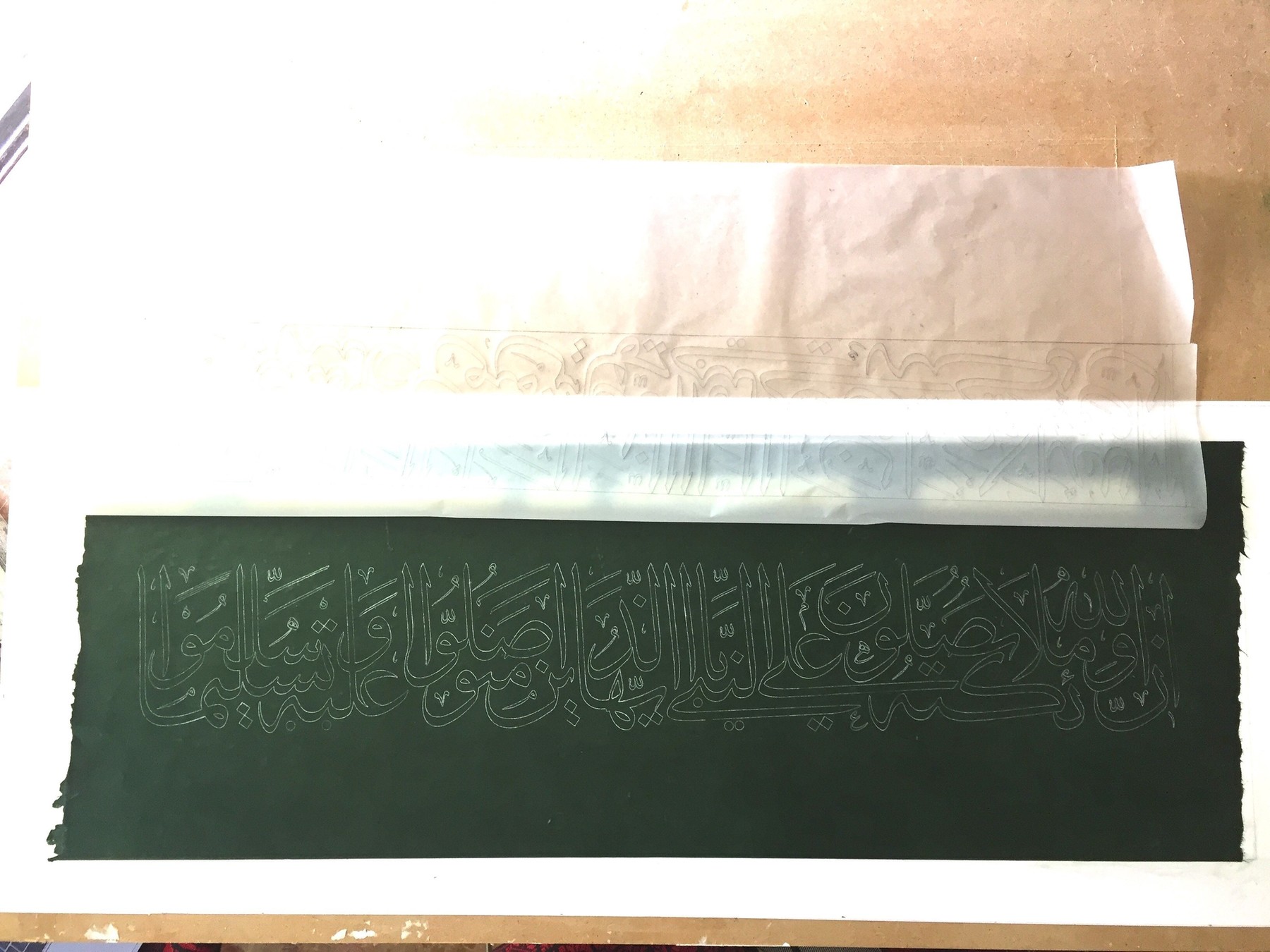 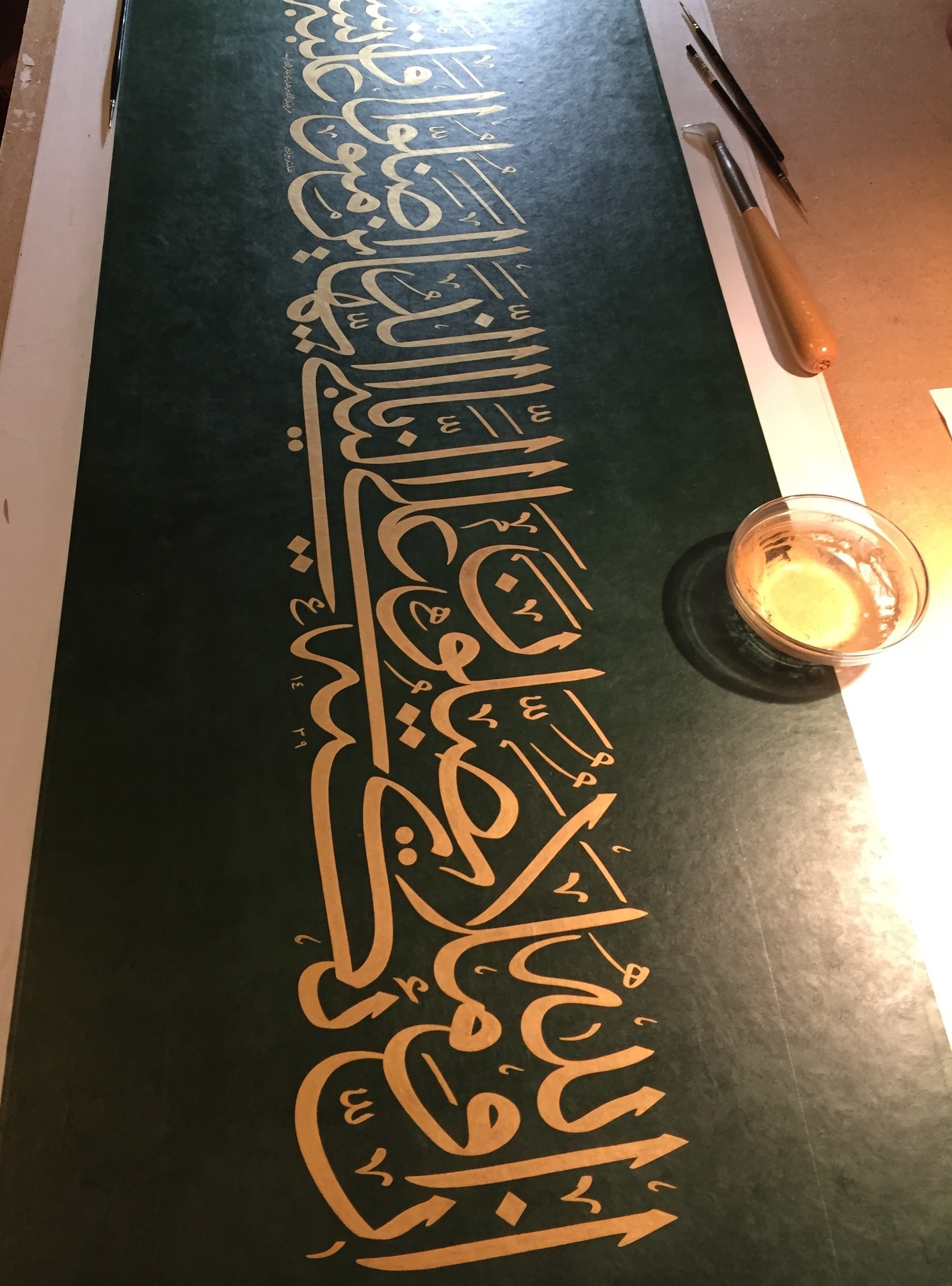 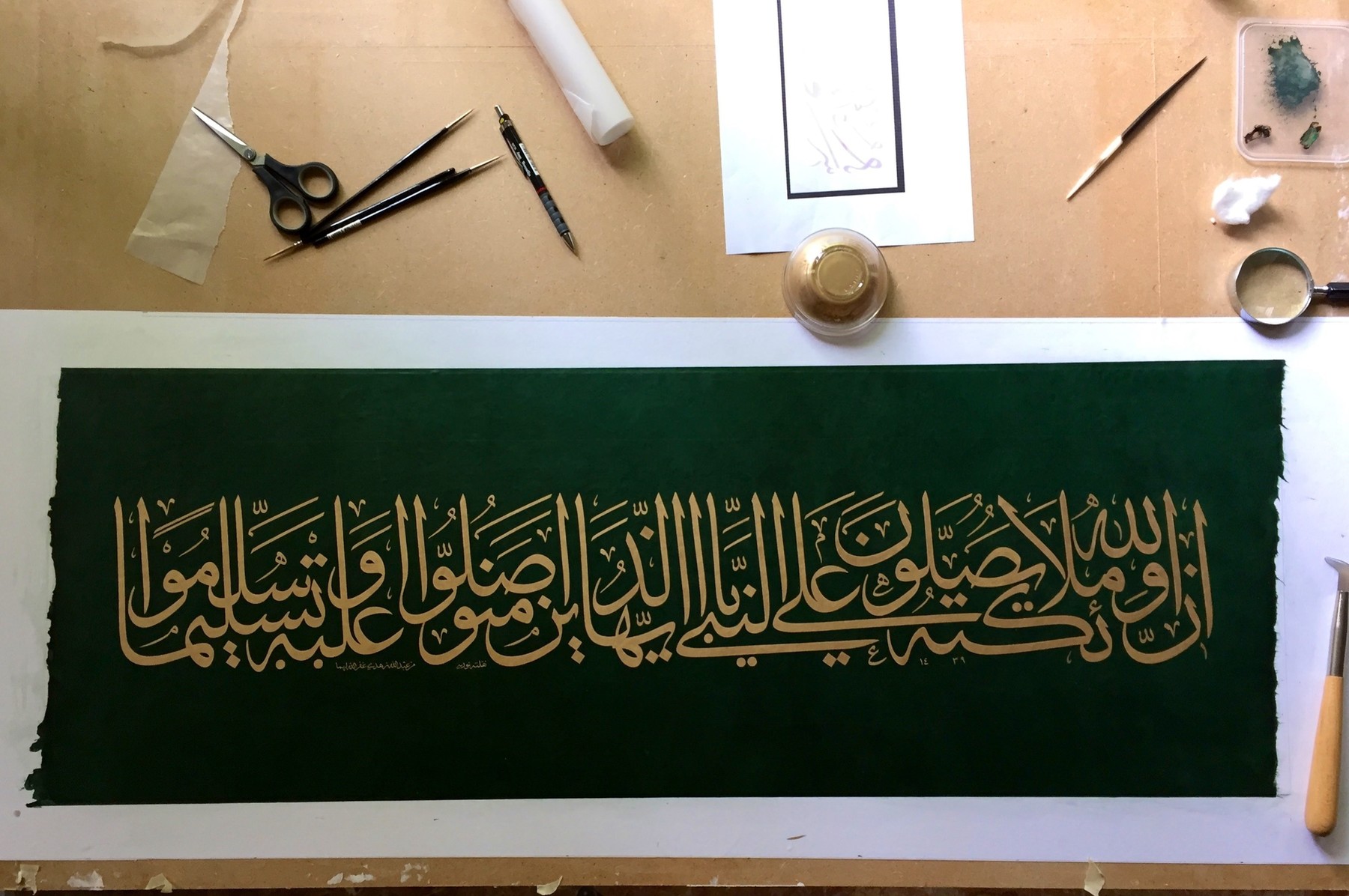 1. For technical calligraphy terms we use the modern Turkish terms. Jaly thuluth in Arabic.
2. Derman, Uğur, “Abdullah Zühdi Efendi”, Islam Ansiklopedisi, Turkiye Diyanet Vakfi, vol. 01, p.147.
3. Much has been written about the traditional method of teaching on the Ottoman School. For an account in English see the introduction by Derman, Uğur. Letters in Gold, New York: Metropolitan Museum of Art, 1998.
4. Needless to say these stylistic variations are often so subtle an untrained eye cannot detect them, however they are one of the sources for study and analysis of any calligraphy student. There is a clear distinction between a personal “style” and lack of skill.
5. Derman, Uğur. “Turk yazı san’atı icazetnameler ve taklid yazılar”, VII. Turk Tarih Kongresi. Istanbul, p. 717.